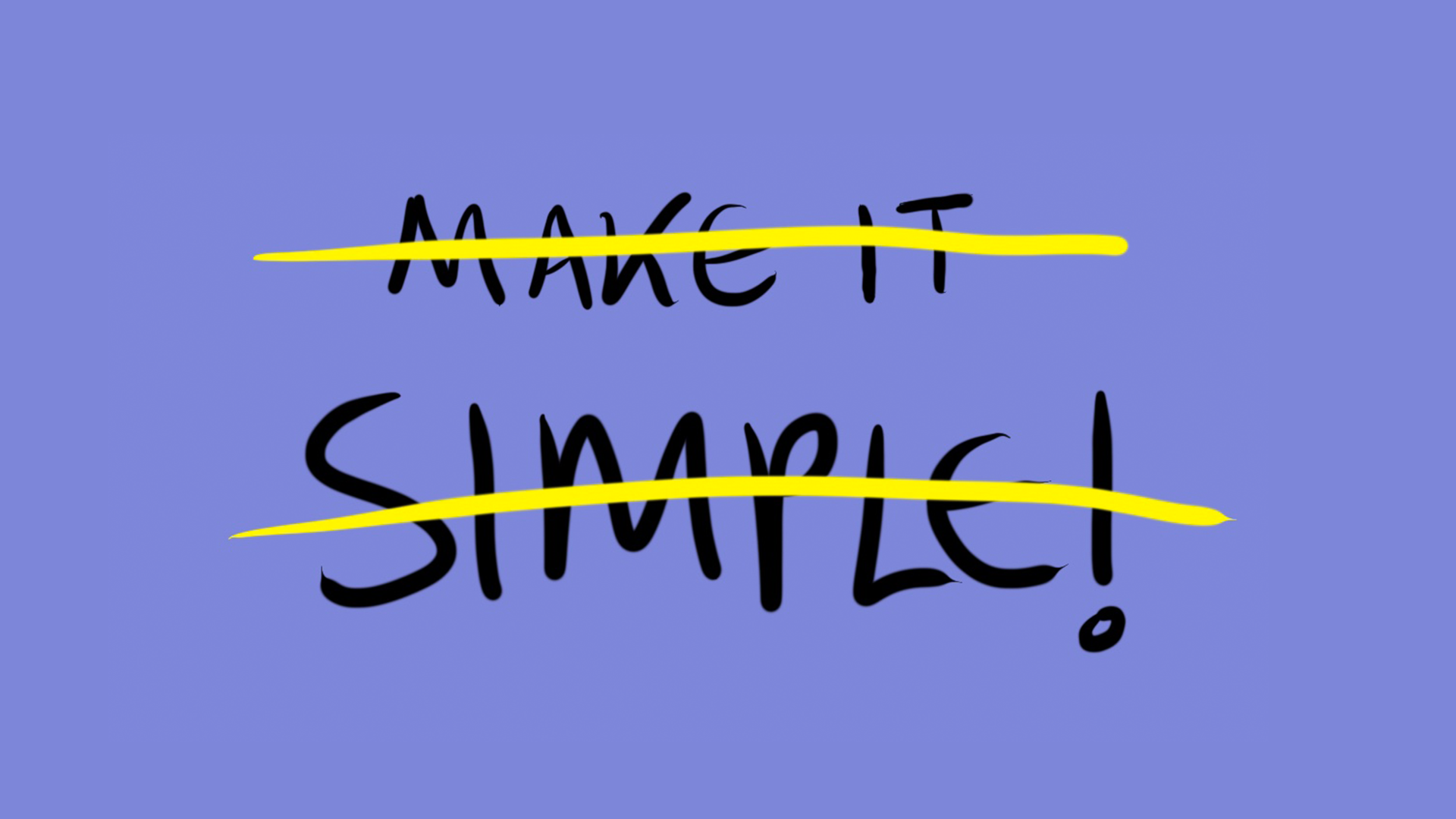 Finding personality in a world of over-simplification and data funnels

We love things with personality. Yet we are surrounded by so much blandness. And not just aesthetically but in interactions and usage. There are multiple causes, of course. But two forces, that increasingly conspire in partnership, standout. First, the rise of “simple” as the North Star in design, product development and brand. And second, data driven decision making and the resulting optimisation funnel.

Where we want more personality and less formulaic we now need to look for an alternative to simplicity and be brave enough to make decisions that sometimes run counter to what the data is telling us. In this article I’d like to suggest two ideas I find useful to maintain awareness of being too reductionist and missing opportunities to generate personality.

The first is that we replace the directionality of “simple” with “elegant”. The second is using the idea of “Sub-Optimal” as a deliberate counterbalance to the tunnelling and bleaching effects of optimisation.

Personality is a fascinating domain. From how to embed it into products, to why some companies and brands have it and others don’t. If you need a compelling case as to why personality is integral to commercial success, loyalty and advocacy, especially in the consumer space, look no further than this sparklingly brilliant and well known post from @fakegrimlock entitled Minimum Viable Personality (MVP); a lovely twist on the popular acronym. If you haven’t read it, do so. I promise it will make you smile. The thinking feels as relevant today as when posted “way back” in 2011.

Personality’s role is more profound than creating differentiation and magnetism though. The necessity to consider personality more carefully is intensifying as the ingredient list we have to play with and what it means to create it are evolving. Increasingly we are designing behaviour as machines and services become more intelligent. For example, in autonomous vehicles.

So from the perspective of creating differentiation and emotional connections this raises questions like “what behaviours will exemplify the personality of the brand?” “How do you make Volvo autonomy feel different from Audi’s?” But in tandem, the personality of an intelligent service or autonomous machine, as expressed through its decisions and actions, is also essential to building comprehension, confidence and trust. How should an autonomous vehicle express itself when thinking about these kinds of dimensions?

Just as personality arises from more than aesthetics, its influence is more important than generating smiles through quirks. Personality will be a factor in our understanding, adoption and relationships with intelligent machines and services. In the context of the next era of products and services our ingredients are no longer limited to form, materials, fonts, photography, motion and interactions on glass, in sound or air. They include behaviour and decision making. This elevates the importance of personality.

Thanks simple, but time for something more

In recent history the quest for simplicity has become a dominant and pervasive force in shaping the thinking behind and the manifestation of products (especially digital), services and experiences that surround us. The siren call for “simple” reaches much further than resulting “clean and minimal” aesthetics but also for how things actually work. And for good reason. Interactions with technology need to be intuitive. Simplicity has been a necessary force to manage rising complexity and new possibilities enabled by technology.

But we have a problem if we are interested in creating things people love. As we simplify we obviously strip things away. Reductionist approaches taken too far transform simple into….ta dah…bland. A line is crossed. I’m not saying beauty and personality can never be found in “simple”, but I am saying that “simple” has become over dominant and frequently applied in a way that crosses the line into beige.

We’ve seen responsive design, for example, create a world where most websites follow a formula and look the same. The industrialisation of User Interface Design and interaction heuristics mean the same answers are found everywhere. This is very helpful at a functional level, but there are trade-offs with differentiation and personality. In practise it’s extremely hard to avoid the realities for designing for multiple devices and therefore screens, but too often the desire to do something different is drowned out by the call for simplicity. What we generally get is conformist. We lost something when we left the heady days of flash sites and the creative explosion of the early internet behind.

The march of simple goes beyond online. Service Design has the concept of adding “positive frictions” as an antidote to the unchecked desire to create frictionless experiences. Experiences that will be hyper efficient but bereft of any personality, something that makes you smile or creates emotional resonance with the brand. Whilst positive friction is a very useful concept, it’s perhaps not grand and flexible enough to stifle simple’s stranglehold or escape the tractor beam of data driven “optimisation”.

In response, I would like to propose that instead of “simple” dominating our direction and intentionality that we replace it with “elegant”. An elegant solution implies something clever, something smart, yet without being excessive: there’s a tinge of economy in there, whilst leaving space for beauty and vibrance, including how something works.

I’m suggesting striving for an “elegant solution” now provides more meaningful directionality than “make it simple” in a world where we understand the importance of usability. Where once we needed the simplicity siren, life now calls for something more. Especially when we are beginning to paddle in the waters of designing behaviour.

Let’s be a bit Sub-Optimal

In tandem with the pervasive call for “simple”, we are in the midst of an ongoing data revolution. This matters to personality because data based decision making is more often than not about optimisation. The physics of data optimisation by their very nature tend to drive things towards one answer. It’s a funnel. When multiple entities in the same space are all optimising everyone tends to arrive at the same point. Ergo, less differentiation.

In this context, the concept of making something “Sub-Optimal” provides a useful provocation as it explicitly calls for acting in ways counter to the generic pull of data optimisation. Take the modern incarnation of the Mini. It is what I would describe as Sub-Optimal. It is not the most space efficient or aerodynamic. Instead, by being Sub-Optimal, it has bags of personality and therefore people love the product and brand. The Mini is not trying to appeal to the widest spectrum of tastes and suffer the dilution effects of compromise.

An awareness to deliberately look for ways to be “Sub-Optimal” is to trigger the search for quirks, hallmarks, moments or other flourishes that will not emerge in the tunnelling process of optimisation. For example, Google is a key “user” for most ecommerce businesses. Their digital presence has to cater for Google’s SEO “needs”. Meeting these needs can be in direct conflict with creative ambition that risks impacting SEO effectiveness. The resulting tensions between SEO/commercial teams and design teams are felt daily across the world. Given the digital landscape, who do you think is winning?

The implications of fixating on optimisation through data go further. Where we want to get to the essence of what something means, or the motivation for being in business or launching a product, data optimisation (as opposed to data) just doesn’t inspire. That’s not its purpose. It’s not about emotion or thematic drivers.

Consider something like entrepreneurial banking. If you look deep inside, the nuclear rods are optimism and delivering change. By understanding and feeling these drivers you can create resonance and engagement internally and externally. An organisation that steers using a rudder augmented with this thinking, rather than being pulled along by optimisation’s singular current, has the chance to sail in new directions. In other words, the basis on which decisions are taken, be they big picture strategic or details like micro interactions, have the possibility to be informed by a different flavour of “compelling”. People will connect with that whether customers or colleagues.

The original Mini exemplifies the pursuit of something that works but at the same time has personality. It was a revolutionary compact design yet created an emotional connection through its form and experience. Will data optimisation give you iconic or create meaning?

So where simplicity taken too far gives us bland. Optimisation gives us generic. These two forces, often in collaboration, have informed and cast an abundance of bland contemporary products and services. Where we want more personality and to keep it on the agenda of how brands, products and services evolve we need to look for alternatives and counter measures that can catalyse new directions.

By striving for “Elegant Solutions” and using “Sub-Optimal” we have stimulus, if nothing else, to spark awareness of the pitfalls of the singular pursuit of “make it simple” and the bleaching effect of optimisation.

I’m not making a case for ignoring data or that “simple” is inherently bad or that all brands should be “about” elegance. Data is the new gold and optimisation an integral part of contemporary business. Things need to be easy to use and beauty can absolutely be found in simplicity. If all brands were about the same concept it would be a boring world indeed.

In short, I now find the aspiration to create “an elegant solution” more inspiring and relevant than “make it simple”: a call to arms which feels like it has run its course. And that “Sub-Optimal” sparks an awareness to search for escape hatches from optimisation’s tunnel.

Personality matters, perhaps more than ever now we find ourselves in the much deeper waters of creating behaviour. Waters in which “simple” won’t do.